Within the number of people that the Hite family at Belle Grove first ensalved included mothers and their children. Nine children were among the first 15 enslaved that came with Nelly Madison Hite’s marriage to Isaac Hite Jr.  Eliza, age 35 had five children: Joanna (12), Diana (10), Demas (8), Pendar (6), Webster (4). Truelove, age 31 had four children: Peggy (9), Priscilla (7), Henry (5), and Katey (3). Truelove gave birth to another four children at Belle Grove. Both Eliza and Truelove’s daughters would have children of their own while at Belle Grove.

Many slave holders expected and benefitted from relationships among the enslaved. Children born to enslaved women were legally the property of the mothers’ owners. It was common practice in enslavement in America to assign adult tasks to children at age 12 or 13. Younger children might fetch firewood or water, work in gardens, tend flocks of fowl or watch other children.

There were several large families among the enslaved at Belle Grove. Including Judah, the cook.

Judah was purchased sometime between 1816 and 1817 from Isaac Hite Jr.'s counsin Abraham Bowman.

In a letter to a friend in April 1836, Ann Maury Hite recounts that Judah just died from a lung ailment leaving children ranging in age from 21 years-old to five weeks-old.

During the last two weeks my Cook was dangerously ill with a complaint one of great suffering a violent pleurisy in the first instance terminating in an inflammation of the heart which was most distressing.

She finally went under the disease on Saturday morning leaving 12 children; the youngest only five weeks old. I deplore her loss to her younger children more than my own inconvenience which is very considerable – but it is the will of him that can not err of course ‘it is wisest best.’ I shall endeavor to discharge the additional duties that devolve upon me to the best of my ability.

April 5, 1836 Letter from Ann Maury Hite to Elizabeth Steenbergen regarding the death of Judah
Courtesy of The Handley Regional Library 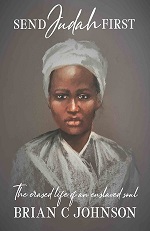 2021). Judah's story has inspired a historical fiction novel, Send Judah First: The Erased Life of an Enslaved Soul by Dr. Brian C. Johnson and published by Hidden Shelf Publishing House in 2019. The cover art is an original work by Megan Whitfield and provides a compelling portrait of what Judah might have looked like--otherwise, there are no images of her.

Read more about another family, the Jacksons, who purchased their freedom.