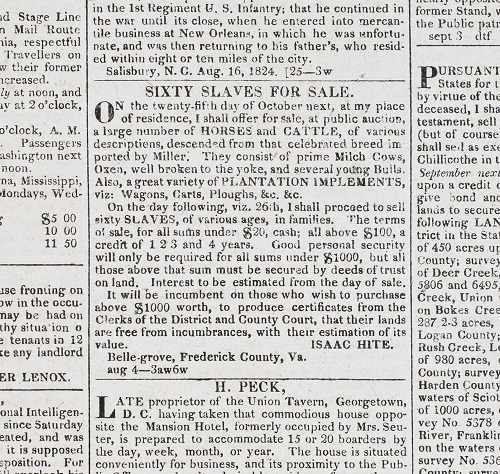 Isaac Hite Jr. placed the above advertisement in the September 8, 1824 issue of the Daily National Intelligencer, the largest and most read newspaper in Washington, D.C. Why would he have done this? Was he profiting from the need for enslaved labor on the cotton plantations further south? The value of the enslaved rose when the United States banned the import of slaves in 1808 and continued to rise with the growth of the cotton industry. Many Virginia planters became suppliers to an internal slave trade. It is estimated that in the fifty years before the Civil War, one million enslaved people were relocated from upper slave states, primarily Virginia, to the states in the deep South.

However, this sale also included livestock and farm implements, suggesting that Isaac Hite had financial difficulties and was downsizing his businesses. Belle Grove Plantation, with its light industries and successful farm, participated in national and international commerce. The Hites’ wealth depended on selling their goods outside the Shenandoah Valley. Buyers in Alexandria, Fredericksburg, Baltimore, Western Europe, and the Caribbean purchased Belle Grove’s flour and whiskey. The tremendous success of American agriculture spurred westward expansion in the early 19th century, fueling rampant land speculation and reckless bank lending. The bubble burst causing the “Panic of 1819.” Its ramifications lasted for years. An 1821 article about Belle Grove in The American Farmer noted “so low was the price of wheat and rye, that both were ground, and either fed to fattening cattle [sic] or distilled.”

This ad also notes slaves were to be sold “in families,” a designation which typically only referred to mothers and young children. Slave sales often separated families in order to achieve the highest total price. Isaac’s intention may have been to maintain some family integrity, but we don’t know if he was successful. After this sale, Hite’s property tax records show fewer slaves, but it is not known how many individuals were sold and to whom.