Fifth Season of Archaeology of the Enslaved Quarter Completed 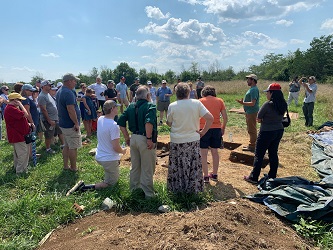 This season focused on exploring the layout of the 1.42-acre quarter site across Belle Grove Road from the visitor parking lot to answer remaining questions about the lives of those enslaved at Belle Grove. To do so, the team dug 37 three-foot square units and recovered more than 9,000 artifacts, bringing the artifact count for the past five years of field work to more than 53,000. The photo shows Mr. Greer showing the site at a public talk in July.

One of the highlights from the season was the excavation of three early 19th-century outdoor fire pits, two of which enslaved people used for cooking. Interestingly, they built these fires in an area where the people gathering around them could not be seen from the Plantation Office and Store—a building the Hites used to surveil people living at the quarter. By placing the fire pits here, the enslaved people created some amount of privacy for themselves.

The archaeologists also finished excavations of a log cabin lived in by enslaved people from around 1800 until it caught fire in the late 1840s. The work focused on finding the house’s foundation or other structural elements. We hoped to find some evidence to tell us how large it was or which way it faced. Despite our best efforts, they did not find any. But, as it is said in archaeology, negative data is data. The team now knows that the house did not have a foundation, sitting instead on footings/piers or resting directly on the ground. While it is not known where in the building it was located, the cabin had a brick chimney. This is interesting because often enslaved people chose not to have brick chimneys opting for wooden and mud chimneys that leaned slightly away from the house and could be pushed down in case of a chimney fire so that the cabin would be spared. A brick chimney suggests the Hites wanted the cabin to appear “nicer,” possibly to make slavery seem somewhat humane to visitors (Jefferson and Madison did this too). A lot of the bricks are over or under-fired, which would have been less expensive, possibly because, despite wanting brick chimneys, the Hites did not want to spend a lot of money on them. 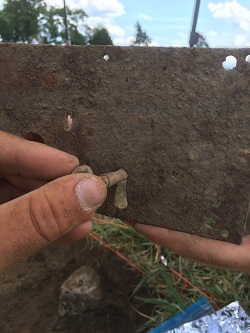 One of the more interesting architectural finds was a door lock and its associated key. The lock was low quality and could have easily been picked. While many enslaved people bought locks for their doors to prevent theft, they usually bought padlocks, which were cheaper than door locks. As the lock was more expensive and less secure than most padlocks, it seems unlikely that an enslaved person would choose to buy it. Like the bricks, we believe the Hites, wanting to make the houses at the quarter appear respectable without spending much money, bought the inexpensive lock. Instead of trusting this fixture, however, the cabin’s residents bought padlocks to safeguard their belongings as two have been found on the site.

2019's fieldwork also concluded the excavation of a large (8’ by 10’) root cellar under the cabin. The cellar was full of animal bones and burned plant remains. Zooarchaeologist Scott Oliver will analyze the animal bones and has already seen rabbit, deer, turtle, possum, and cat in the recovered artifacts. Paleoethnobotanist Linda Seminario will analyze the plant remains, and so far, she has identified corncobs, peach pits, walnut shells, and seeds from wheat, squash, and possibly okra.

Perhaps the most evocative find in 2019 was a fragment of a locally made earthenware crock with three fingerprints impressed in it. Enslaved people bought one out of every five vessels made by Valley potters, and this artifact highlights the fact that many artisans in the region—like the man who left his fingerprints on this crock—owed their livelihoods, in part, to enslaved people buying their products.

In the 2019/2020 academic year, Mr. Greer will be a predoctoral intern at the University of Missouri Research Reactor and will have the opportunity to perform chemical analysis on the locally made ceramics to determine where in the Valley they were made. In 2020 he will work with Belle Grove staff to create an exhibit for the lower level of the Manor House on the findings of all the research.